As with synthetic ropes, wire rope may be either right-lay, meaning the strands are twisted in a clockwise direction, or left-lay, in which the strands are twisted counter-clockwise. The outer strands encircle a core, which may be either fiber or wire. Wire core rope is abbreviated “IWRC”, for Independent Wire Rope Core, and is approximately 10% stronger than fiber core wire.

Torque is a problem inherent in twisted ropes. As the rope comes under strain, it tries to “unlay” and creates twisting forces, which may cause the wings of trawls or bridles to spin up. One solution for this problem is to use swivels to remove the twists; another is to use “non-rotational” wire rope.

Non-rotational wire rope is an 8×19 construction with a wire core. The outer strands and core have opposite lays, so that under strain the opposing torque’s should balance each other out. However, non-rotational rope will twist significantly if it is over-stressed, so it should be oversized for the area of application. If it is overstrained, the torque of one component will override that of the other, resulting in “birdcaging” around the fittings and possible core failure. Severe twisting or birdcaging in non-rotational wire means that it has been overstressed and should be upgraded.

The core in non-rotational rope is relatively larger than in standard IWRC and contains 20% to 30% of the strength of the rope. When splicing 8×19 wire rope, as with all IWRC constructions, the core must be buried in the splice. In this case, the core is separated into its 7 strands (6 outer strands and 1 center), and each of these strands is married to an outer strand, so that one outer and one core strand are tucked together. Cutting out the core when splicing non-rotational wire results not only in a loss of strength but also in loss of the non-rotational characteristics of the wire.

Torque from the main trawl wires may affect the gear. This twisting force attempts to rotate the trawl doors (since the boat itself is too big to turn). If both main wires are right-lay, both doors will be tilted in the same direction relative to the boat; one toward its back, and one toward the towing bail. This may cause the gear to fish off-center relative to the vessel. Some vessels are balancing their gear by using right-lay wire on one winch and left-lay on the other. In this way, both doors are torqued either forward (toward the bail), or backward (toward the back). Either way, the gear should be centered. If door stability is a problem, it is more desirable to tip the doors toward the bail.

Switching to left-lay wire requires all parts of the system to be examined before the wire is installed; check especially for wear on the drum or sheave caused by the right-lay rope. Any rubbing of these elements will cause severe wear an the new wire. Also be aware that right- and left-lay wire should not be spliced together; the opposing torque’s will cause the splice to open up and let go.

Wire rope longevity is affected by several factors. Since it involves metal moving against metal, wire rope is essentially a machine, and, like a machine, requires lubrication. On American vessels, wire rope is seldom lubricated, largely because of the perceived mess caused by heavy oil, but it significantly extends the life of the wire. Lubricant application devices are available which can be clamped onto the wires as it is set or hauled.

Most main wire wear is from sheave contact. As mentioned earlier, groove size and sheave diameter are factors in wire wear. This wear is particularly important if a vessel is fishing at a constant depth, so that one area of the wire is frequently riding in the sheave. Wire wear becomes critical in an auto-trawl system, where the wire runs back and forth over the sheave many times during the course of a tow.

As a rule of thumb, main wire should be turned end-for-end every six months. This turning allows the relatively new wire on the winch drum to be brought into use while the worn wire is held in reverse. It may also be helpful to cut off the terminal 25 or so fathoms of wire and re-splice the end, so that the section riding on the sheave during the tow is moved back on the wire. It is also helpful to protect the splice by splicing in a shot of grade 8 chain at the end of the main wire, so that the chain itself rides on the sheave when the doors are up.

Inspect the trawl blocks regularly for sheave wear, and rebuild or replace them when rubbing or increased groove depth is evident. New main wire costs approximately five times as much as a new block.

When winding wire rope onto a drum, follow the “right-hand rule.” Facing the drum on which you want to wind the the rope, with the rope coming from behind the drum, hold up your right hand (for right-lay rope) or your left hand (for left-lay rope) and make a fist. Extend your index finger. That finger represents the wire, and your fist represents the drum. Your hand hand should be palm up if you wish to underwind the wire, and palm down if you will be overwinding. Your finger will point to the side of the drum on which you should begin winding the wire. For example, if you wish to overwind right-lay rope, you face the drum with your right hand palm down and your index finger pointing to the upper left-hand corner of the drum. Remember that in this situation you are facing the drum; if you are standing next to the spool of rope, the sides are reversed. 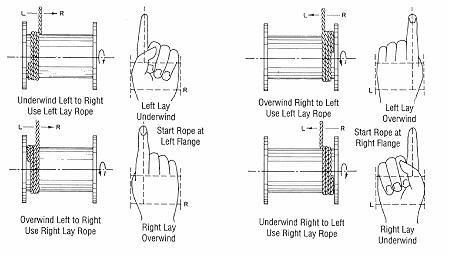 Wire rope is subject to stress whenever it passes over a sheave or drum. This stress is greater with blocks of smaller diameter, less with blocks of larger diameter. The relationship between rope and sheave diameters is called the “D/d ratio”, where D is the diameter of the sheave (at the groove) and d is the diameter of the rope. For maximum rope life, most manufacturers recommend a D/d ratio of about 32. In the fishing industry, with size and weight limitations, this is impractical (for example, to conform to this guideline with 1″ main wire, your trawl blocks would have to be 32″ across at the groove). Because sheave sizes are relatively small, the wire rope wears more quickly.